Images formed in a 3 mirrored equilateral triangle kaleidoscopic shape. Here as well, bilateral symmetry is at play. Three figures reflected in their 3 different mirrors, all 3 lines joining in the middle of the triangle, at an arbitrary location, not necessarily in the mid-point. See the diagram below. Mirror A, has a red line connecting both extremities. Mirror B, the blue line connects the same way, and needs to share its outline with the existing red line. The remaining area is basically the C mirror’s shape, by default. These are the two original lines that need the most tweaking when determining what type of creature you will eventually draw within.

Below is a quick elaboration on the above lines. The Wimp vs. Batman, with a torch filling the remaining area. I’ve highlighted the two main lines that create the tessellation. The red line reflected in one mirror creates the face by joining the two extremities of the mirror. The second mirror, has the black line from one edge of the mirror to the other, but sharing part of the way with the red line. They connect at the bottom tip of the ear. The third mirror has its shape determined by default. Cool symmetry rule to play with. 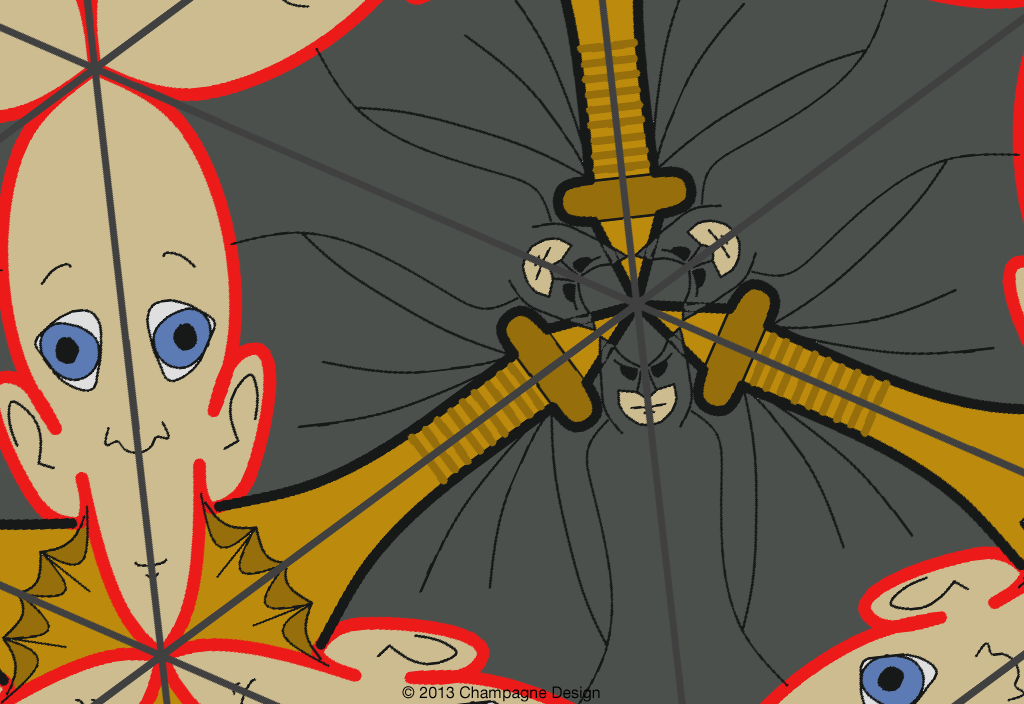 On zoom-out, an interesting mesh of barely visible triangles, in this case, because of the curved shapes within, it ends up looking like interlocking circles. Hexagons and Louis Cubes.

Here is one of my favourites, built with the P3m1 symmetry rule. The Elf, the Wizard and the Skeleton, where the 3 figures have a bit of topic fantasy in common. A bit more of a complex construction than the above drawing. 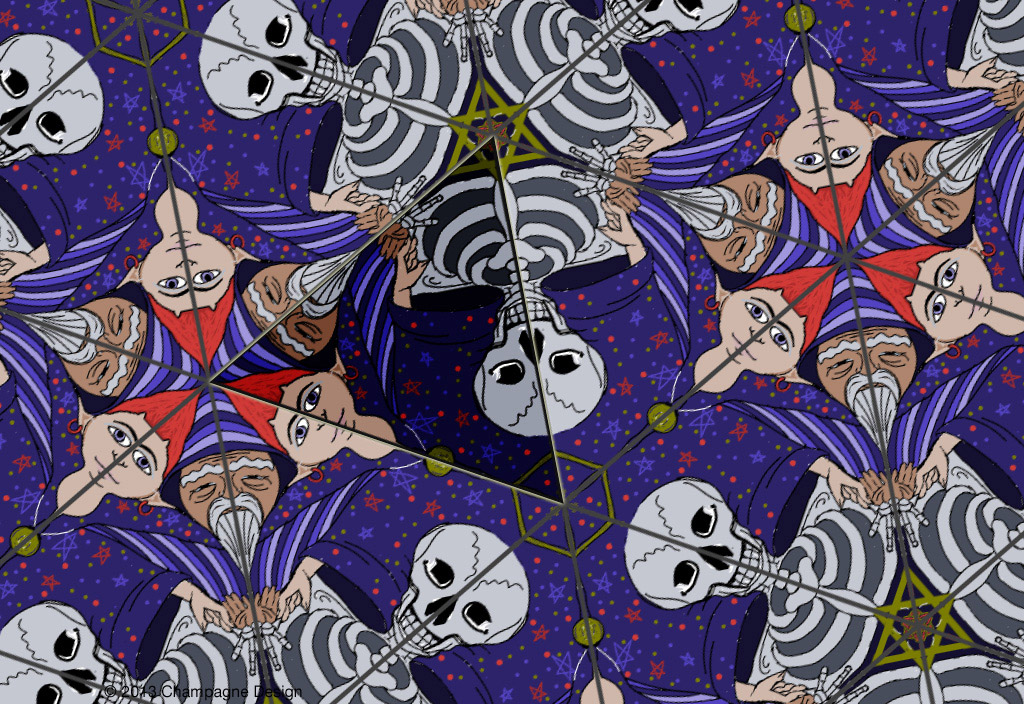 Or for something quick, try Louis Cubes, a favourite design of marquetry artists (the colouring is off according to them). Three simple straight lines, one from each point, joining in the middle of the equilateral triangle. 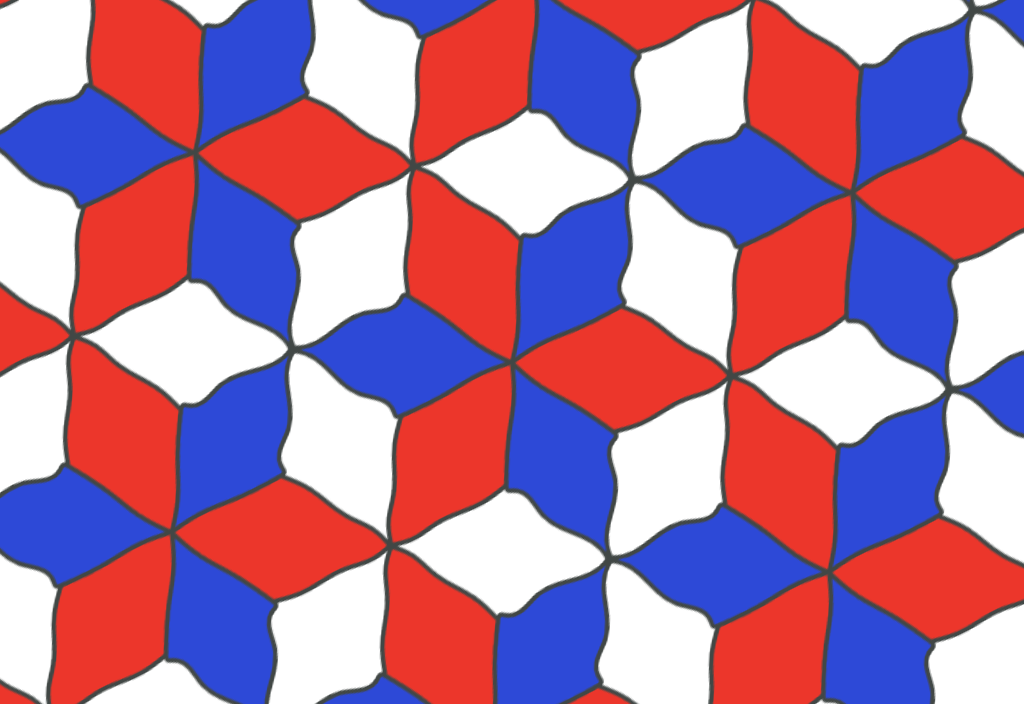 For a better illusion, the colours are corrected in Photoshop, below. All the tops are white, and shadows properly placed. 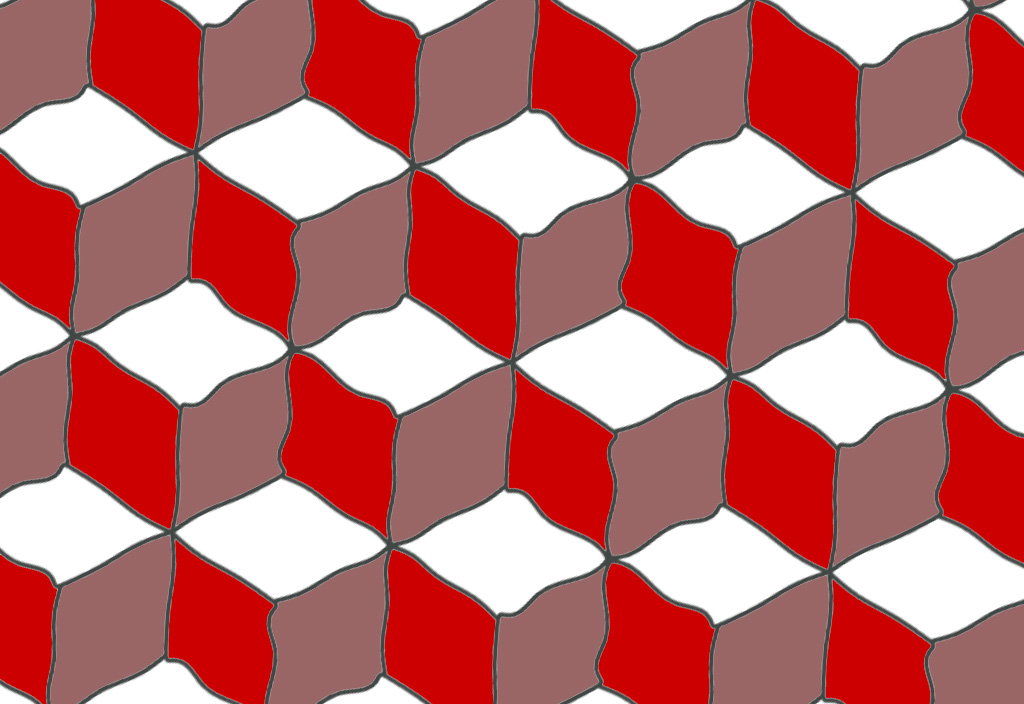 Here is another drawing built with P3m1 symmetry: The Bodybuilder, the Nerd, and the  Hugger aka, TATTARRATTAT. One long palindrome.

If you’re a “Learn by Seeing” “Learn by Doing” kind of person, I’ve started creating videos on “how-to” create tessellations. I’ll be covering each of the 17 symmetry groups, one class at a time. And like all artists, we need to make a living. So. I’ve uploaded these to the Skillshare platform. I’ll get paid by minutes watched.

You can take the classes for free. Skillshare offers anywhere from 2 weeks to a month for free if you sign up, even temporarily.

You can register for just a month and cancel anytime. It’s less than the cost of a Netflix subscription! And you can still stay put on the couch. There are over 40,000 classes on topics for creative persons just like you. Join my mailing list, either here on my blog (in the sidebar), or a at this link for a specific list I use to announce new classes.

I’d love for you to join me on this wonderful learning adventure.

My classes have received an independent rating of 9.7/10, placing these Skillshare classes in the TOP 2% of classes reviewed by CourseMarks!

Here is a list of the classes up so far: