I had been keeping an eye on a single deer, standing quite still in the fallow field, in the middle of a flock of geese. A little weird. Usually they stick to their own kind. When, from the corner of my eye I saw these two huge things leap out of the edge of the forest. They are huge. They are unafraid. Big and bold. The tail is strong, long and black half way down to the tip. The faces are amazing, full of different shades browns and tans. They were focused on prey. But the lone deer was at least 60 metres away. Mind you, with some tall grasses hiding them. The two cougars were probably angling towards the sheep farm next door. With a possible deer and Canada goose snack on the way. Not exactly something to be encouraged, or watched passively. Not TV. We pulled out the telescope to have a better look. They, were looking right back at us, as the hunds were making a racket, which we encouraged. You could see they were measuring us up, are we a threat or not. They eventually decided against attacking the deer, and leaped back into the forest.

I’ve been walking back there, with the two dogs, almost every day for the past seven years!  Wicked.

But then again, cougars have a 200 square kilometre roaming range. Vancouver Island has the highest density of cougars in the world. Hey, I googled it. I was bound to spot one eventually. Two in this case.

Neighbours were just on their way back from a walk in the back trails… they mention they saw a deer with blood on its rump, just that morning, not too far from their log house next door. Probably the same one I saw earlier, the one that wanted to be a Canada goose real bad.

Next day. A black tail flicker above the grasses, at the edge between the fallow field and the forest. Went inside to get the telescope, pointed it but saw nothing else along the whole edge. Looked up in time to see it in the same spot as yesterday, leap from behind the grasses and into the forest. Only saw the black back paws, rump and tail clearly, as he was almost gone by the time i focused on the movement. Probably coming to finish off their snack. 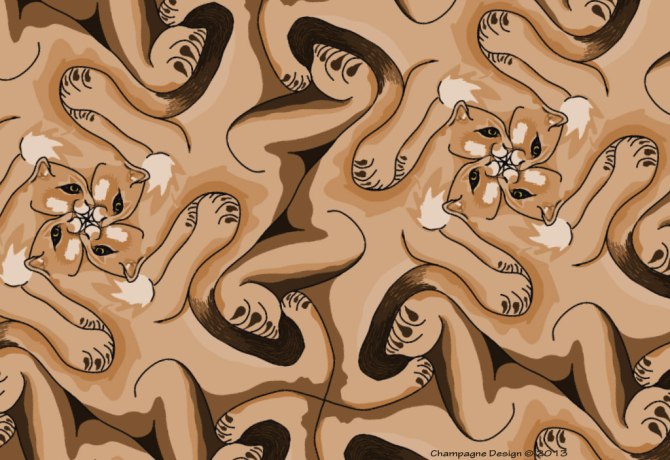 Other wildlife seen from the Bark Echo Ranch deck: The Champagne Design office is on the second floor, above the wildlife viewing deck!

Found the time to tweak the colours on the Cougar tessellation. A slight difference in tone to separate the four creatures.