My first ever tessellation was accomplished using this P4g symmetry group.

My understanding occurred during a class on crystallography, works with the same principles. What a blast that was. Hooked since then.

The basic concept is a 4-way rotation inside a square, built of mirrors. One line from the rotation point to the perimeter corner will give you four halves of an identical figure.

If two lines are drawn from the rotation point, to anywhere on the perimeter, two figures will appear, such as in MCE’s Angels and Devils, below. 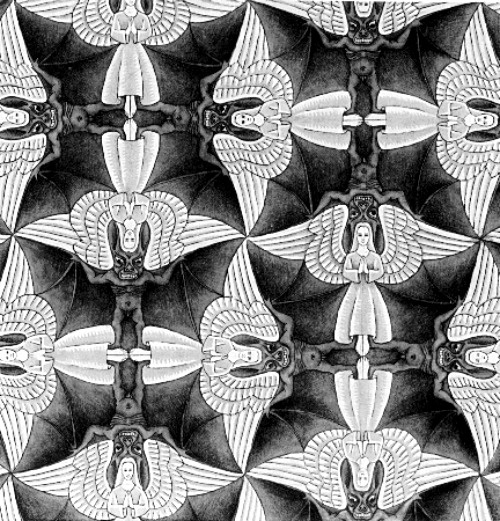 1- mirror symmetry down the body,

2- figures are head to head and feet to feet, hooked at the arms/elbows/hands/wings…

3- 90 degree rotations at the arms… always end up looking the same, in my case anyhow

P4g used to be my favourite symmetry group, before software came out. I’ve since expanded my repertoire and now prefer the total absence of mirrors in designs — really enjoying P6 and P3.

The image below illustrates the two lines to the perimeter concept, Two Fitness Styles, one dude posing his bodybuilding skills, the other doing his yoga thing. Note the area sharing for the heads! I seem to be doing a lot of that. 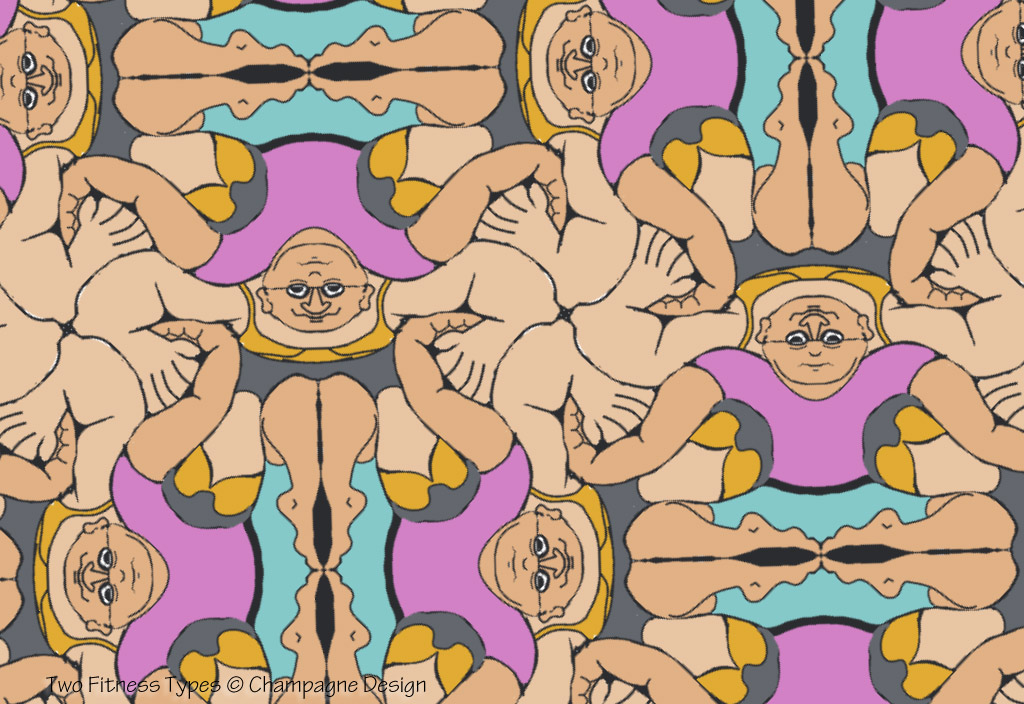 If you’re a “Learn by Seeing” “Learn by Doing” kind of person, I’ve started creating videos on “how-to” create tessellations. I’ll be covering each of the 17 symmetry groups, one class at a time. And like all artists, we need to make a living. So. I’ve uploaded these to the Skillshare platform. I’ll get paid by minutes watched.

You can take the classes for free. Skillshare offers anywhere from 2 weeks to a month for free if you sign up, even temporarily.

You can register for just a month and cancel anytime. It’s less than the cost of a Netflix subscription! And you can still stay put on the couch. There are over 40,000 classes on topics for creative persons just like you. Join my mailing list, either here on my blog (in the sidebar), or a at this link for a specific list I use to announce new classes.

I’d love for you to join me on this wonderful learning adventure.

My classes have received an independent rating of 9.7/10, placing these Skillshare classes in the TOP 2% of classes reviewed by CourseMarks!

Here is a list of the classes up so far: