This symmetry group uses two parallel glide reflections. The glides can be either vertical or horizontal. In the image below, M.C. Escher has used vertical glides, which I’ve drawn-up for you, the black lines. Two alternating parallel lines, one at the rider’s heel, one through the horse’s rear hoof. The central block can be used as a stamp, it contains all the elements of the image, twice, one rider facing left, the same one facing right, one has been coloured with a different shade, for comprehension of the image. 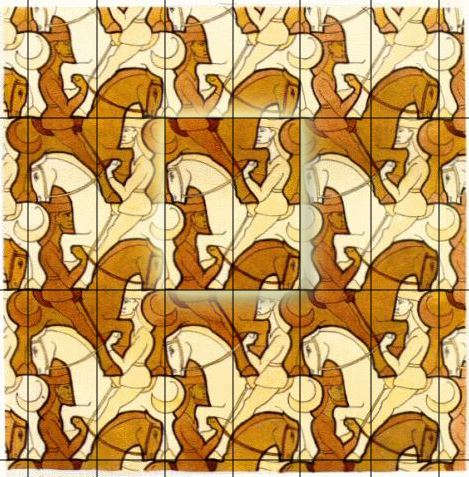 The image below, The Ultimate Soccer Dive, uses horizontal glide reflections. Guess I could have put the German colours on his jersey instead of Italy’s colours (sorry Jeff). But the latins do it so well, with so much emotion. The Argentinian, Maradona, popularized the now worldwide move decades ago. Diego does it well. So does Robben. And Muller. They’ve picked-up bad habits.  They all dive, it’s depressing, messes up the whole game. Brits have a bit more dignity and restraint. But I still root for Schalke04. The Royal Blues.

The Ultimate Soccer Dive — Player pulls his own hair, looks back in tremendous agony (and to check if the ref is watching), and dives to force a foul. Sheesh.

I talked about the “triple whip” in a previous post, I guess this is the “double whip”. In the image below, “A” identifies the corners of a rectangle. The first line connects point “A” with another instance itself on the same glide line. That’s the red line. The second line, in blue, also connects “A”, with another instance of itself, but across the other glide line. If we look at the rectangle, we end up with two lines whipping out from the same corner, to two of the other 3 corners. 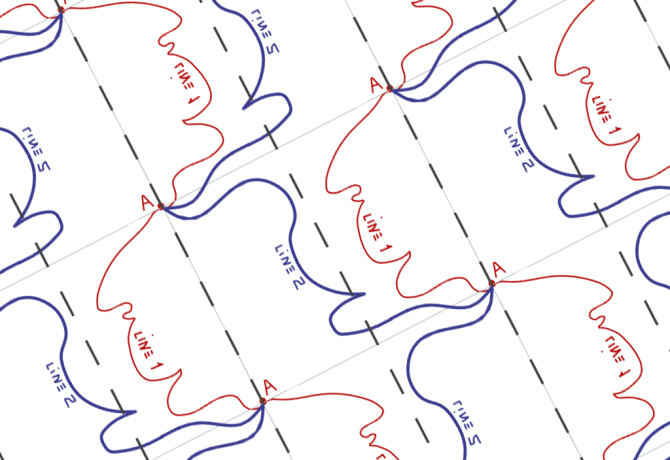 Below, another Pg tessellation. Trying to run away from a life of “Office Work”. Help. Hilfe. A l’aide. Time to go walk the dogs.

3 thoughts on “Symmetry Group Pg — For all Soccer Fans”