A new App called “iO Crafter” on the iPad has just come out, from Jürgen Richter-Gebert. Using it to deform into spirals is where my interest lies. As well, it has other functions to deform your images: build a platonic solid; build a kaleidocycle;  view a kaleidoscope; hyperbolic kaleidoscope; and conformal maps. I have installed it and tested it for tessellations in the style of fully nested shapes, full characters and not simply point groups. Up to now, I’ve successfully created mp4 videos from all symmetry groups except P1 and P2. See the chart below, it lists my attempts and results.

If you want to try creating a video like this one, from your own tessellations, export a perfect rectangular tile of your tessellation, either from Photoshop, Illustrator, KaleidoPaint or iOrnament – these are the four applications that I usually use to create my tessellations. A tile is defined as a rectangle that can be repeated both horizontally and vertically, without any shifts. All lines up in a perpendicular grid. This is the reason that symmetry groups P1 and P2 do not work, as there is a shift, similar to a brick pattern, and this makes it difficult to anticipate the lining up of the design.

Purchase and install iO Crafter for the iPad, along with its extension add-in. When you first open the app, you are given a wide sample of tiles to play with, but instead of using the available samples in the top row, ( mostly point groups) click on the down arrow button; this add-in will give you the option to import your own tiles. One of the options is to “use the entire image”, select this option. Click on the arrow to proceed to the next step, and choose “deform to spiral”.  Play with the options to zoom-in, zoom-out, spiral in either direction, rotate the characters in or out, vary the colours. Once you are satisfied with the set-up, you can export your creation using the video export button.

The video below was created using “Run Away Office Boy”, a tessellation in symmetry group Pg, wallpaper group 16.

This next video was created using “Sasquatch”, a tessellation in symmetry group Pmg, wallpaper group 9. Who knew there were that many Big-foots out there.

The only fix I would suggest to this app, is the GIF export function. The resultant image is not up to par. A better image format would be PNG, as it is lossless, or uncompressed JPG. We shall see in the next version if this is corrected.

Here is the list of tessellations, and their symmetry groups, which I have tested for their compatibility to being mapped into spiral deformations. P1 and P2, not possible due to their need for an nonalignment shift when tiling. 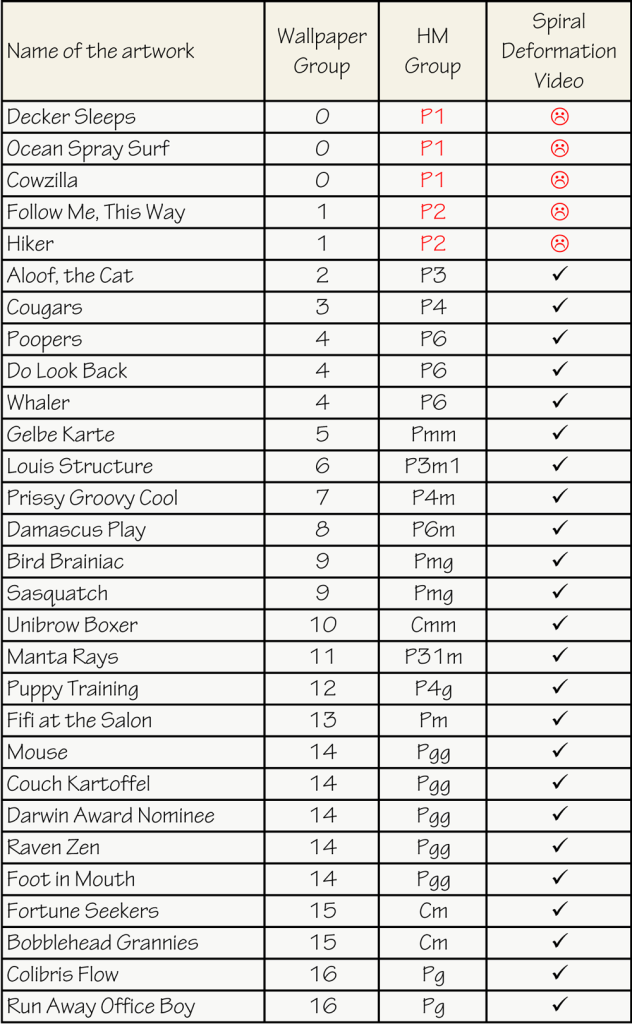 Only symmetry groups P1 and P2 do not work with spiral deformations.